When trad climbing, also called clean climbing, is largely dispensed with bolts as security points. Instead of the bolts, mobile fuses such as Friends or wedges are placed in rock cracks. How Friends work and what you have to look out for when laying these Clamps is explained by Andreas Trunz from Wild Country Central Europe.

Many climbers respect the laying of friends and fear that they will not hold mobile backup points. The reason for this fear is sometimes the lack of understanding of the clamping devices. We want to change that. The best way to illustrate the basic principle of Friends is with the following picture.

The climber in the picture presses his feet against the rock, creating friction. The heavier the climber is, the stronger he must push against the sidewalls to create enough friction. Similarly, two aluminum legs of a mobile belay device connected to an axle may jam in a crack (see following figure). 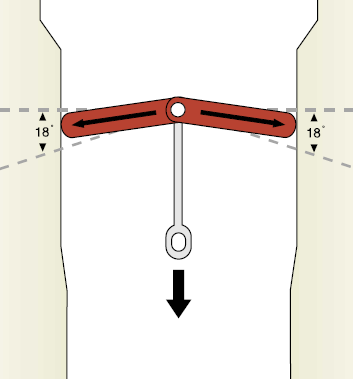 Since here, in contrast to the climber, no rubber sole but aluminum pushes against the rock, the meaning of the angle between leg and side wall (clamping angle) is clear. 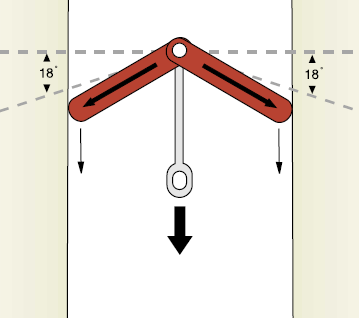 In the example above, the limit, i.e. the slip angle, is 18 degrees. As soon as the legs are steeper than 18 degrees to the side wall, they start to slide. The same applies, by the way, to an aluminum ladder that stands on a granite floor. Here we know intuitively that we cannot place them at any steep angle to the wall. The above example with the fixed aluminum legs would only work in exactly one specific crack width. Wider cracks would require longer legs to keep the angle constant, while narrower cracks would require shorter legs. This is illustrated in the following graphic. 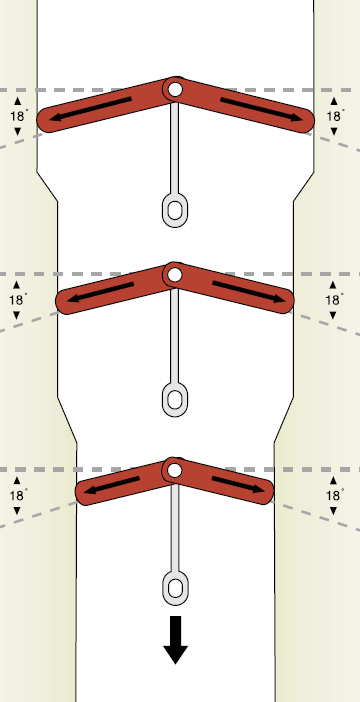 The Friend is now nothing more than a collection of countless pairs of thighs of different lengths, as the picture below shows. 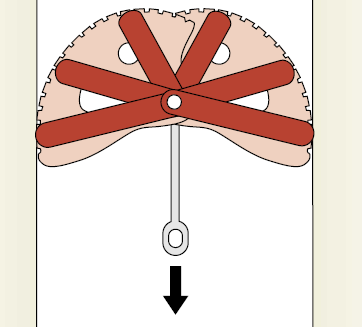 The sum of these pairs of legs results in the elliptical shape of the "cheek". Friends consist of four such jaws so that they are more stable. Whether a friend is completely contracted or the jaws are stuck in the crack at the open end of the application area, the angle of the imaginary pairs of legs (line contact point - axis) is always the same (at Wild Country since 1977 the magical 13.75 degrees has always been constant).

Practical tips for climbing with friends

Laying a friend in a nice crack is easy as pie. Only a few points have to be considered:

When falling into a friend, large (explosive) forces act on the sides of the crack. Around four times the traction. In case of a fall with 5kN load on the redirecting carabiner in the Friend, the rock is pushed apart with about two tons. These forces are harmless if the Friend is placed in compact rock. Behind dandruff or blocks, these explosive forces can be quite dangerous.

In rough rock (e.g. gritstone), friends can even hold in cracks that open slightly downwards. However, parallel cracks or - even better - those that run downwards (and outwards) are ideal. This works in a similar way to when the ladder is placed at a smaller angle - i.e. closer - to the wall, i.e. it prevents it from slipping. In the low-friction lime, active clamping devices can only hold under ideal conditions! So keep an eye out for V-cracks here!

Tip 3: Think of your future!

Now you are standing in front of the friend, but shortly the perspective can be very different. If you look up to the friend later, then you will be happy if the bridge pointed in your current direction from the start. Because a friend loaded under rotation is - if at all - only stuck on two of the four jaws. This point is particularly important for the first intermediate belay: If you fall here, it will of course be loaded downwards. However, if there is a fall later in the length and your belaying partner is not exactly under the first belay, the latter will be pulled up to the outside. Therefore, two placements together are ideal here (the lower one facing outwards, the upper one facing the lintel).

Moving the rope can change the position of the friend or it can even come loose from the crack. In order to prevent this, the use of longer exes or even 60cm slings is recommended, especially when the rope runs unevenly, according to the motto “on the long leash, otherwise it will cut you off!” This also works well against cable pull.

First feedback about the quality of a placement you already get by pulling the Friend:

With good rock quality: If a friend stops a move from 10kg, then he also holds 500kg.

If these tips are not enough, we recommend the Wild Country "Friend Bible" (English).

The story of the Friends as mobile backups

Climbing should be safe and fun. In 1971 this was the impetus for the American Ray Jardine to start his research on a clamping device to secure parallel cracks. The Californian aerospace engineer soon found the solution that we know today as Friend.

While his friends revolutionized traditional climbing in Yosemite Valley for Ray and his closest friends, including the first Inspection of the nose made possible in one day, he couldn't find any investors in his home country who believed in his idea. The idea only turned into a marketable product thanks to a meeting with British climber and entrepreneur Mark Vallance. He put everything on one card, risked all his belongings and founded the company Wild Country in the heart of the Peak District in 1977 to market the first Friends.

Even 40 years later turns upside down Wild Country everything about the pure form of climbing. The goal of Wild Country is to develop innovative products for passionate climbers with a sense of responsibility. This spring, the British company mixed the climbing shoeMarket with a special Michelin sole and a novel shoe construction. That has also hit high waves Belay device REVO, which is available from selected stores this week.

Note
The information in this article is not exhaustive. Gain experience in a safe environment, for example in a climbing garden with safety bolts on bolts. Or even better: get professional training.