Cranes in the rope are among the most annoying phenomena of climbing life. It's extremely annoying to have to untangle a rope salad if you just want to get involved, or if such crane angels appear in the ascent. But is there any risk even if one rope turn after the other suddenly piles up on the rope above the tie-in loop? The equipment guru Kolin Powick (KP) of Black Diamond has pursued this question.

Have you ever been on a pitch and ended up with a corkscrew-shaped piece of rope on your harness? Me, yes. And it drives me crazy It happened to me in the lead ascent, in the ascent with single ropes, half ropes, twin ropes, old and new ropes. Tangles in the rope have been around for as long as climbing has existed. How and why does it come about? How can you prevent it? And is there a risk if too many such kinks form while climbing?

I am sure that there are more, but the following four points are the main causes of rope cranes:

Until recently, ropes from almost all manufacturers according to the "old school" were shot from the factory. A few are loosely available in rope sacs (which avoids kinking), but most are simply always wrapped in a circle just as you would simply wrap a rope around your upper arm or shoulder and your hand. As formerly the mountaineers.

If someone who does not yet know this problem would use a factory-built rope as it is for climbing, that person would spend days unloading.

For many years, there has been a "recommended way" to handle a new rope. Here, the entire rope is pulled several times from one end of the rope to the other with one hand through the other hand. In this way, the windings and crane gel brought along, which arise during the factory winding can be removed.

In the meantime, many rope manufacturers have started to ropes up already ex works so that errors during unwinding and resulting crane jaws are prevented. Since the ropes are not twisted when shooting, no windings must be removed from the rope during unwinding. Such a rope can simply be taken fresh out of the packaging and used for climbing without it beginning to hurt. Very cool! While not necessarily exciting, it's an innovation that not only curbs annoying crane gel formation but also saves time.

When dropped, the position of hooks on the stand can have a big impact on your rope. Ideally, you have two bomb-proof hooks with Quicklinks, Abseilringen or a chain. If the whole stand is then set up so that the rope hangs in it like an inverted V, the rope will hardly hurt.

If the rope passes through two hooks at a greater distance, so that the rope is deflected again, this can lead to a Krangelbildung.

Have you ever wrapped a birthday present in a gift ribbon and then pulled the gift ribbon over the back of the scissors with your thumb so that it curls up nicely? A very similar effect occurs when you let go of a single, very narrow hook. Most carabiners, quicklinks, and chain links are of sufficient diameter that this problem does not occur. But with a very narrow carabiner, a thin chain link or a worn carabiner with a rope groove, the rope can tangle.

This is not so common these days, as most people use descenders. But be warned, when rappelling with half mast throw the ropes like crazy.
You can avoid this by making sure that the ropes are completely free. In this way, the turns turn out of the free rope ends immediately. Another possibility is for a person to rappel with a left-handed halfmast throw and the next one to rudder with a right-handed halfmast throw. In this way, the turns are neutralized and the Krangelbildung is greatly reduced.

However, it is best to use a descender and no half mast when rappelling.

This is how you get rid of rope cranes

There are different possibilities. For example, you can simply let the entire rope hang on the stand for a while, which detaches the tangles from the entire length. This is a good start, but it is not always easy to find the right place. Then you can simply pull your rope through two quickdraws like in the top rope. The entire length, once forwards, once backwards. That will help too. Another option in summer is to pull the rope behind you over a dry meadow. Simply take one end of the rope, walk around a bit, and the tangles will be twisted out. My preferred method is to pull the rope through an ATC belay device in a route or on the ground.

A few years ago I flew to Alaska in the winter to launch a quick (failed) summit attempt there. When my buddy and I picked up our equipment at the airport hangar in Talkeetna, we stumbled upon a brand new rope - naturally wound up in the old-school way. I was busy with carbines and things like that when I saw in the corner of my eye, as my buddy this rope simply mindlessly disassembled. I knew immediately that we would have the biggest rope salad ever. We tried to lay the rope on the snow-covered runway and pull it apart. In the end, we tied the rope to the plane and let the whole 70 rope meter, stomping backwards through the snow, run through our ATCs. After each of us had done this three times, finally, the whole Krangelei was turned out.

Apart from the frustration of a corkscrew-wrapped rope on the harness, between the carabiners or on the belay device, I have always wondered if there is a particular risk in the dynamic load of a rope gewrangelten. Could drop the core when falling into a stranded rope? We wanted to see the whole thing with different ropes at the drop tower.

We decided to test two scenarios - lead and lead.
We turned the ropes pretty hard before each drop test.

We picked up a few ropes from the office, new and old with different diameters.

These are the results of the material tests

That can be said in summary

Based on our limited but tough test conditions (both severe crane formation and high loads), it is unlikely that a core rupture will occur if dropped into a rope with a crane. However, a heavily used rope showed greater damage during the test (strong flattening and signs of incipient rupture) than a new or less used rope.

I can be completely reassured. While I am struggling in the climb in a rope length, which has hooked my wife, and I'm about to pull the cinch cinch on my harness when falling long, so I can be sure that this rope salad no unpleasant consequences will draw. Uff.

When rappelling or topping, you should use quickdraws as possible to protect the stand. The snappers of the quickdraws should point in opposite directions. When the last person is discharged, the rope should be properly threaded in the stand. If the hooks are too far apart, it may be better to rappel to avoid cockling.

When checking out a sport climbing route, where many people fall into the same carabiner again and again at the same key point, it is worthwhile occasionally to check this carabiner when deflating. If a deep notch has already formed, it should be replaced. On the one hand, this protects the ropes from the formation of a crane, and on the other, it increases general safety.

And remember, when you unpack your brand new rope, it's worth investing some time to disarm. Either with one of the methods described here. Or, if it's a "climb ready" model, you can get started right away. 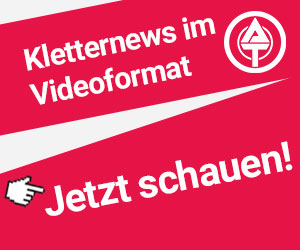